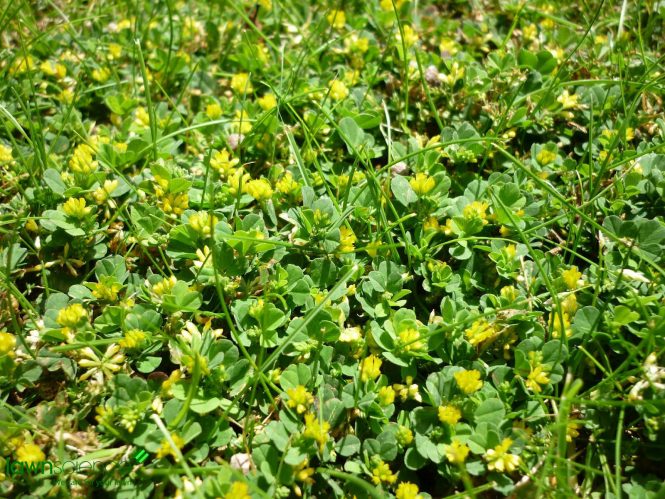 Lesser Trefoil (Trifolium dubium) is an attractive little lawn weed which is reasonably common on a lot of untreated lawns in England.

Some folk call it suckling clover or Irish Shamrock. It is a member of the clover family. A relative to peas and beans. It is also related to the herbaceous perennial white clover (Trifolium repens), but trefoil is generally easier to control.

It is an annual weed, similar to Bittercress and Common Chickweed. meaning that it will die each year and the next generation relies on seeding from the previous year. This is an advantage in the control of the weed as just stopping it from seeding will help to prevent it from coming back in subsequent years.

It has three leaflets which are on short stalks. It can be distinguished from similar weeds like Black Medic (Medicago lupulina) (which has leaves which taper to a point) and White Clover (Trifolium repens), which doesn’t have leaf stalks.

Lesser trefoil is a species of clover

Lesser trefoil usually emerges between June and October, with odd seedlings appearing at any time of year. It prefers less acidic soils and can spread through a lawn very quickly, suffocating the grass. It also has a very low-growing habit which avoids the mower blades!

Trefoil produces a large number of small flowers, about 5mm in width. These flowers self-pollinate. These are very noticeable as a single plant can produce a large number of flowers. Seeds are produced about a month later. Once distributed in the soil, lay dormant for many years.

Lesser Trefoil is easily controlled in lawns. A regular lawn treatment will take care of any infestation in a lawn.

If you have a problem with Lesser Trefoil in your lawn, then get in touch and I will be happy to advise.