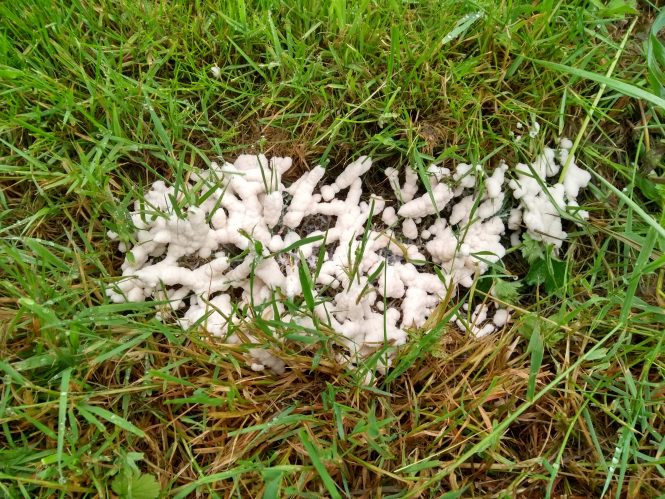 This wonderful example of a slime mould recently appeared on my test lawn. It is a great example of the colourfully named Dog Sick Slime Mould (Mucilago crustacea).

This example was about 30cm in length and a bright cream colour. It almost shone compared to the green grass surrounding it. It appeared very quickly (overnight) and then had turned black and faded less than a day later.

I rarely see these on lawns so it was a treat to be able to observe one appear on my own test lawn.

What is a slime mould?

They are not a plant or animal. They are a huge collection of single-celled organisms called Protozoa, specifically in the taxonomical class called Myxogastrea. When the conditions are correct (similar to lawn fungi) they bloom and spore in huge numbers. This is the structure which becomes a slime mould. Once they release their spores for the next generation, they collapse and die.

They can vary greatly in size and colour, but are most often grey, yellow or white.

This example I captured below is one of the most common in the UK. It is called Mucilago crustacea or dog sick slime mould. This is due to it’s rather unpleasant look on the grass. If you look carefully though you can see that it is intricate and delicately grows up and around the grass leaves.

Do slime moulds harm my lawn?

Slime moulds do not harm grass. They grow up in and around the grass leaves and obtain their food by smothering bacteria, spores and tiny organic matter as they grow.

They may leave an unsightly black “splodge” on the grass. This can be easily removed with a rake or the mower.

As it does not harm the grass there is no need to control it with treatments. If it looks unsightly and you would like to get rid of it, then you can squirt it with a jet of water to wash it off.

It can also be raked or brushed out and will disappear soon.

If you have a strange growth on your lawn I would love to see a picture of it. Please get in touch on my ask a question page.

Here are photos which have been sent in by readers via my ask a question page.