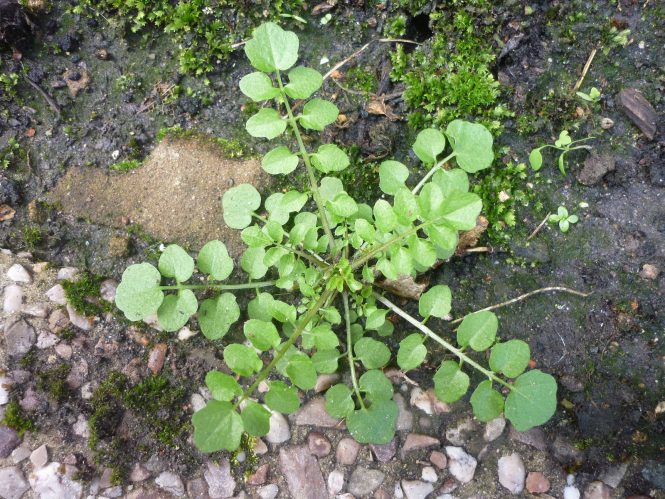 The hairy bittercress (Cardamine hirsuta) is an extremely common annual garden weed. It can quickly appear on any bare soil on vegetable patches, flower borders and in any thinner areas of your lawn.

The plant is from the Cardamine genus, which is a large group of over 150 flowering annual and perennial plants that are in the Brassicaceae family and so, bittercress is related to cabbages, sprouts, broccoli and mustard.

Bittercress is native to Europe and Asia and has now made its way over to North America. It’s often transported on compost of container-grown plants. Once established it quickly spreads to all areas of your garden. It is only really a problem over the winter on thin lawns, or in shady, moist areas where the grass finds it difficult to spread.

How do I identify hairy bittercress?

Hairy bittercress is a small weed, rarely growing more than a few centimetres high. The hairless stems grow out of a central rosette. They have dark green round-ish leaves regularly spaced along its length which are no more than 0.5cm wide. It quickly develops small, delicate, white, four-petaled flowers which grow into long narrow seed pods (called siliques) and these pods can open explosively (through a process called explosive dehiscence), sending the seed up to a metre away from the parent plant. The tiny seeds are also sticky and are easily transported around gardens, stuck to clothes, tools and machines. This is how it can spread so quickly around your garden. Seeds also remain dormant in soil for several years, only germinating once at the surface.

Hairy bittercress is an edible herb but, as its name suggests, it is rather bitter and unpleasant to taste. This is why it is rarely used in cooking, although hunter gather cook does suggest a recipe for bittercress pesto.

Control of hairy bittercress in a lawn

Hairy bittercress is rarely a problem weed in lawns. It tends to choose to occupy damp thin areas of the lawn where the grass has trouble growing anyway. Hand-weeding is often best practice, but larger colonies can be treated with a herbicide. It is controlled easily with a regular lawn treatment.