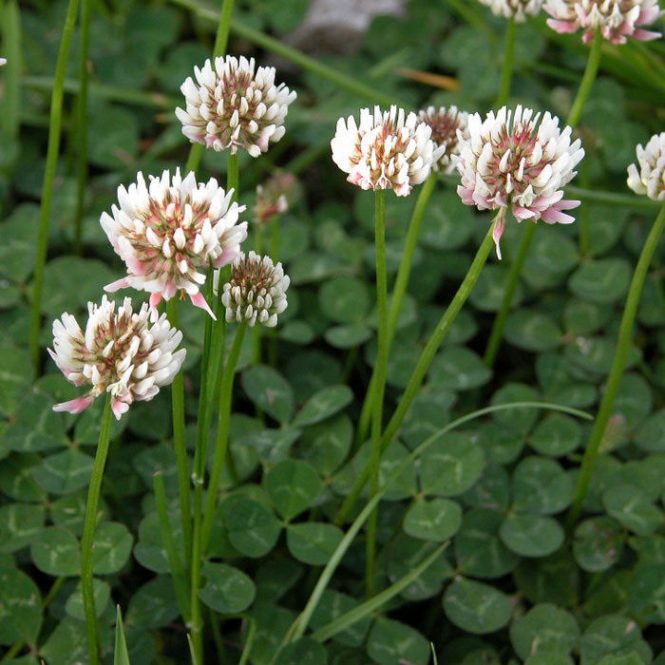 White clover is a very common, and easily recognisable weed on lawns all over the UK. The Latin name for white clover is Trifolium repens, which literally translated means three-leaved creeper.

Its common name is also Dutch Clover and it is a native plant to all of Europe and Africa and has been exported worldwide as a valuable and nutritious pasture crop for grazing animals and has subsequently naturalised on all continents.

It is one of the most numerous species in the Fabaceae family of plants (are also known as légumes), which also include the humble pea and bean. It is closely related to other lawn weeds such as the annual lesser trefoil (Trifolium dubium).

White clover thrives in full sun and on most types of soil, but it is similar to grass in that it is very sensitive to shade and drought, so you will only generally find it a problem on healthy lawns that see a lot of sun.

It is an herbaceous perennial, which means that it will die back fully during the winter, only to grow back from its roots in the spring.

How can I identify white clover?

White clover is very low-growing plant and, in a lawn, it will stay below the level of mowing. Tests have shown that it will struggle to survive in longer grass as it is unable to reach light deep down in a dark sward so regular mowing will actually increase the light available to it, keeping it strong and encouraging it to spread.

White clover is very recognisable with its familiar shamrock-shaped three leaves at the end of each stem (but sometimes with four or more leaves). Some plants have a white speckled crescent pattern on each leaf.

Each stem of white clover is a stolon which can produce its own roots and leaves when it touches the ground, enabling it to spread up to one meter a year. This behaviour makes it a very hard-wearing plant because if one growth node or stem is damaged, the plant can still grow vigorously from any one of the other growth points.

The main way to identify white clover from the other clovers is that it produces distinctive white flowers in the summer which sit proud of the plant, up to 20cm high. These flowers are often mowed away with your normal mowing routine, but that doesn’t weaken the plant, as patches of clover have been known to stay active and continue spreading for many decades!

The three leaves are said to represent hope, faith and love … and if you are lucky enough to find one with four leaves then the extra one represents good luck, giving rise to the legend of the luck of finding a four-leaved clover. The truth is that extra leaves on a clover are a genetic mutation, and are not limited to just one extra, with reports of five, six or more leaved clovers being found!

Lucky four-leaved clovers are coveted by collectors, and some folk have amassed huge collections of thousands of plants. For more information on how to find your own four leaf clover have a look at this helpful finders guide.

The seeds can stay dormant for a very long time and long-buried seeds can be brought to the surface of your lawn in the winter through worm-casts, and the little cast provides an ideal environment for a new white clover plant to take hold in the spring sprouting out of nowhere in the middle of your lawn.

White clover is often used in an organic lawn, or on a lawn that is to be grown on soil with low levels of nutrients. This is because, as a legume, it has the ability to ‘fix’ nitrogen from the atmosphere into the soil, reducing the requirement for an additional fertiliser to maintain the nitrogen cycle.

White clover in cooking and in medicine

All parts of white clover are edible. The leaves can be eaten raw in salads or stir-fries, although they are said to be much more palatable if boiled for a few minutes first. They are also good source of protein which is very handy to remember if you ever find yourself stranded in the wilderness and are in need of a nutritious snack!

The flowers can be dried and then ground into a flour, and have been used in the treatment for gout and rheumatism. The roots can also be eaten, although they are rather tasteless and hard to digest!

According to ukmoths.org.uk, The flowers are food for several case-bearer moths, including Coleophora sp. which is the common UK clothes moth. The plant is also a food for some troublesome gardens pests such as wood pigeons, slugs and snails, so if you have a problem with these eating your brassica’s, a white clover patch will certainly help to lure them in!

The flowers can provide a good source of pollen for bees and other insects, but only if you don’t mow the flowers off, so in a well maintained lawn, this is unlikely!

Control of white clover in a lawn

Clover is a creeping, perennial weed. It can be very difficult to hand-weed out completely and several goes at trying to pull it out will be needed. It has a habit very similar to Creeping cinquefoil. The only way to be sure of removal would be to apply a selective lawn weed killer. White clover is very easy to control using weedkillers. It is advised that the flowers are mown off, before the weed killer is applied, to reduce the risk of any of the chemical being passed to any pollinating bees or insects.

A regular lawn treatment applied during the growing season (March to September) will control white clover very easily and effectively. For more information, please don’t hesitate to get in touch.