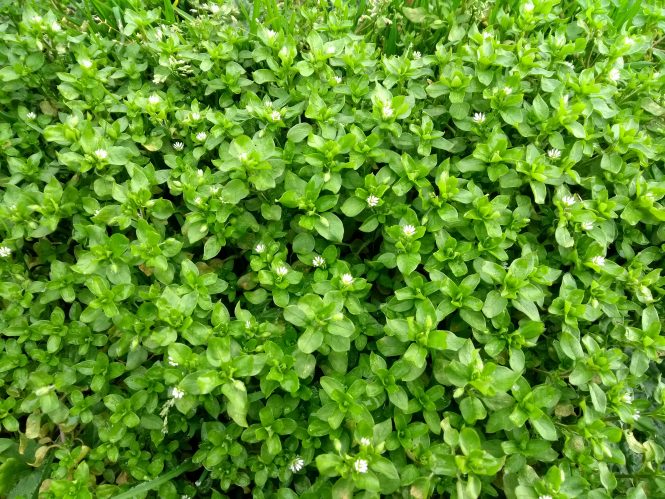 If you have your own garden, then there is a good chance you’ve seen common chickweed (Stellaria media) before. It is a common lawn weed in the UK. Chickweed produces a huge quantity of seeds throughout the year. Due to this characteristic, it has become something of a nuisance plant. It will take root and grow everywhere and can be difficult to control in your lawn and garden.

Chickweed can affect many types of locations in your garden. Lawns, beds, borders, uncultivated ground and roadsides. All can be common habitats for this plant. Common chickweed is a semi-evergreen annual. It has to flower and set seed for it to spread the following year. It is very hardy and can produce leaves and flowers all year round.

Common names for the plant include Stitchwort, Starweed, Chickenwort, Craches, Maruns and Winterweed. There are other plants refered to as “Chickweed”. This is why this one is “Common” Chickweed.

The Latin Stellaria media comes in two parts. The first part, Stellaria, is from the word “star”. This is in reference to the shape of the flowers on the plant. Media, comes from Latin, and means “intermediate”, “mid-sized” or “between”.

Stellaria plants belong to the Carnation family of plants (Caryophyllaceae). With over two thousand five hundred species in the genus, they are very common in gardens all over the UK.

Chickweed grows best in cool, humid conditions. While it can thrive in a variety of locations all over Britain, it does tend to prefer lighter soils. Common chickweed is native to the UK and Europe and has naturalised in many parts of North America.

How to identify common chickweed

Common chickweed is a small plant. Only 30cm tall, at most. The leaves are simple and opposite each other on the stem. The flowers are bright white in colour. They have five white petals and five sepals. The foliage does look a similar to Self Heal.

Common chickweed can set seed all through the year. The seed can germinate even under a layer of snow. The flowers themselves are often self-pollinated. There is a small period when insects cross-pollinate. During winter months, flowers do not open and it self-pollinates. It sets seed even under harsh winter conditions.

An individual seed capsule contain ten seeds. The total number of seed produced by each plant on average can be well over two thousand during a season. This is how it can spread very quickly.

How does chickweed spread

The typical life cycle of a common chickweed is six weeks from germination to setting seed. In good conditions chickweed can produce five generations in a year. This is how it forms large mats of foliage, smothering lawn grasses.

The seeds are capable of germinating at any time of year, but tend to favour the spring and the autumn. Seedling can emerge from over 30mm deep, so old seeds can come up after cultivating the soil.

Common chickweed is supported by a central mass of roots which are shallow and fibrous. These give way to a cluster of prostrate stems which can reach 35cm tall. They have a single line of hairs along their length. The oval leaves are bright green and pointy, and they are borne in opposite pairs. These pairs fold to each other, which helps to protect new growth in the evening.

The flowers are small, white and shaped like a star. These flowers can form at any time of year but are most often noticed in spring and autumn. The flowers have five petals, which are very deeply divided. The flowers only tend to last for only a day or so.

It is interesting to know that when it comes to common chickweed, there is an abundance of saponins in it. These are a group of chemicals which are toxic, but the actual quantity inside each chickweed plant is small. In order to actually be at risk, you would need to consume your own body weight to come to any harm.

The leaves of Chickweed are edible. Similar to lettuce in taste, but a much more delicate sensation. The leaves can make a herbal tea.

From a medicinal perspective, the plant was used to treat skin and lung conditions in the past. Although in a more modern context, it is an ingredient in skin creams, and as a treatment for eczema.

Controlling individual plants is not difficult. But, if it has established for years the sheer numbers may be overwhelming. Careful hand weeding can be effective, although this can take some time. Picking it out of a lawn as soon as you see it will prevent spreading. Professional maintenance would also keep it under control. It is important to do this before the plant flowers and the seeds set and it becomes a problem.

Selective lawn weedkillers and professional herbicides are the best control for common chickweed. I have never found it to be a difficult plant on maintained lawns. Some regrowth from seeds is possible if the infestation is widespread.

If you have a problem with Common Chickweed in your lawn and live in the Exeter area of Devon, please don’t hesitate to get in touch.

Photos of Chickweed submitted by readers