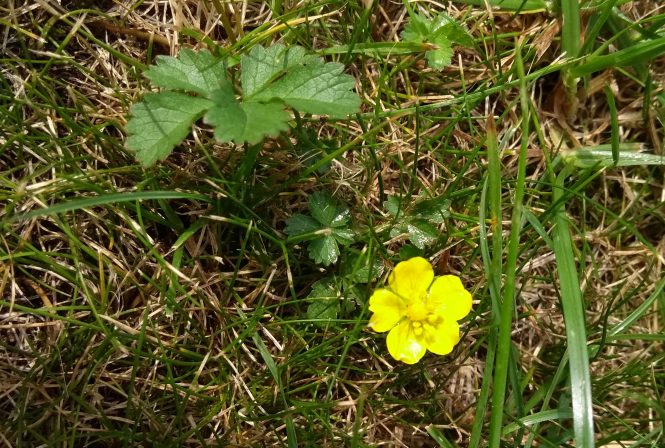 Creeping cinquefoil (Potentilla reptans) is an herbaceous perennial lawn weed. It is very common in the UK and one which can really affect the look of your lawn if left untreated.

The Cinquefoils, (genus Potentilla), are a family of more than 300 species of herbaceous flowering plants. They are in their own branch in the rose family (Rosaceae). They are close relatives to Geums, the common herbaceous border plant.

The Latin name of the plant is Potentilla reptans. “Potentilla” is the ancient name of the genus which contains over 300 plants. “Reptans“, is Latin for creeping or crawling, describing the habit of the plant.

It’s worth noting that Potentilla reptans can be confused with silverweed (Argentina anserina). However, it is a distinctly different. There is still some debate over their genetic relationship, some saying they are related. Others dispute this.

The plant is native to Eurasia and North Africa and has naturalised in many other places around the world.

It is common throughout England and the British Isles and is usually found growing in hedgerows, verges, gardens and grassland.

Creeping cinquefoil is fully hardy in the UK, being able to survive the coldest of winters. It prefers full sunlight, which is why it often does well in lawns. However, it can still be a nuisance in the shadier areas of your garden.

It can grow well in any soil type. It is most visible during the spring, being very early to leaf after the winter. Cinquefoil appears in spring at the same time as Lesser celandine (Ficaria verna).

How to identify creeping cinquefoil

Creeping cinquefoil leaves are serrated, hairless and rounded. They appear in groups of five to seven from a single node at the end of a long stem. This makes it quite an easy weed to spot in a lawn as it is unlike other common British lawn weeds.

Throughout summer into early autumn it produces bright yellow flowers with five heart shaped petals. These are like a flat buttercup. The flowers are 2-3cm wide and appear on the leaf axils. If left untouched, cinquefoil flowers can reach up to 50cm in height. This is rare in a lawn.

Cinquefoil spreads quickly via creeping stems and also by seeding in autumn. It can often invade a lawn from the flower beds, and vice versa.

The plant is invasive if left unchecked. Control can be difficult. If hand weeding, any roots left in the ground can regrow. Regular weeding is advised to weaken regrowth and keep it down.

It does not thrive in moist, well cultivated soil. In flower borders, annual mulching and soil improvement will help to improve other plants and keep cinquefoil at bay. In a lawn, regular feeding and good horticultural practices will stop it from becoming too much of a problem too quickly.

If it has got out of hand the best way to keep it in check is through the application of a professional herbicide. This will get it under control quickly. I have never seen cinquefoil as a particular problem in any of my lawns after my regular lawn treatment programme has started.

If you have a problem with Creeping Cinquefoil in your lawn and live in the Exeter area of the UK, please get in touch and I will be able to advise.