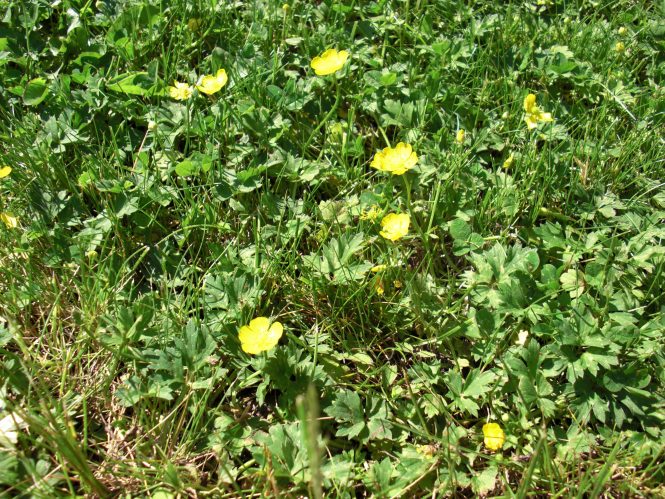 Creeping buttercup is a very common herbaceous perennial weed found on all types of lawns across England and which can quickly become on a problem on even well maintained lawns.

The Latin name for creeping buttercup is Ranunculus repens. Ranunculus is the family name of buttercups, which literally translated means “little frog” referring to the trait in which most buttercup species are found near the edges of water. Repens is Latin for ‘creeping’, so it is the ‘creeping little frog’!

It is also known as creeping crowsfoot, and is native to Europe, Asia and North Africa. However, due to it previously being sold around the world as an ornamental plant, it has become an invasive species in many countries.

Sources (such as the RHS) say that creeping buttercups are more common on poorly drained ground and heavy soil however, in my experience I often find it infesting lawns of all soil types and in all areas, given a chance!

How do I identify creeping buttercup?

Creeping buttercup is most commonly identified through it’s leaves because not all of the plants flower. Those that do, need to be established in a lawn for a number of seasons. You don’t see the flowers in lawns as much as you might expect.

The leaves are three-lobed, grooved, dark green and grow out of a central node. They vary in overall shape quite a lot with some having pointed tips and others are more rounded. Creeping buttercups can be easily identified by the unique, seemingly random, pale spots on the leaves. There are not found on any other buttercups.

It is a creeping plant, producing stolons which run along the ground setting roots for new daughter plants to root and grow from. Buttercups creep very quickly, running a meter or more in a growing season. It is very similar to Creeping cinquefoil (Potentilla reptans) in habit.

It is low-growing, so its leaves are not troubled by mowing. Buttercup is a very aggressive competitor with grass and other weeds. It can often be the only weed in a neglected area of lawn.

The iconic flowers are bright yellow with five glossy petals and are produced between May and September. These are rare in mown lawns.

Similar to most buttercups, creeping buttercups are poisonous to eat. They exude a nasty sap which can cause skin blistering on some people. It is not a herb, and not used in any cooking or medicine as far as I know.

A common folklore story is for children to shine the flowers under each others’ chin to see if they “like butter”. Obviously, this is not a reliable method of determining a persons fondness for dairy products, but it did take Cambridge University researchers a long time to work out the science behind the unusual glow that buttercups reflect.

How do I control creeping buttercup weeds in my lawn?

Due to its creeping habit, it is one of the more difficult weeds to control in a lawn. If it’s established in a lawn, the sheer number of plants makes it virtually impossible to hand weed. However, a couple of regular treatments will take care of even the most severe of infestations, with the majority being controlled with the first spray and any few that remain being controlled with the second spray a few months later.

If you have a problem with creeping buttercups on your lawn, and live in the Exeter area of the UK, then please don’t hesitate to get in touch and I will be happy to advise.