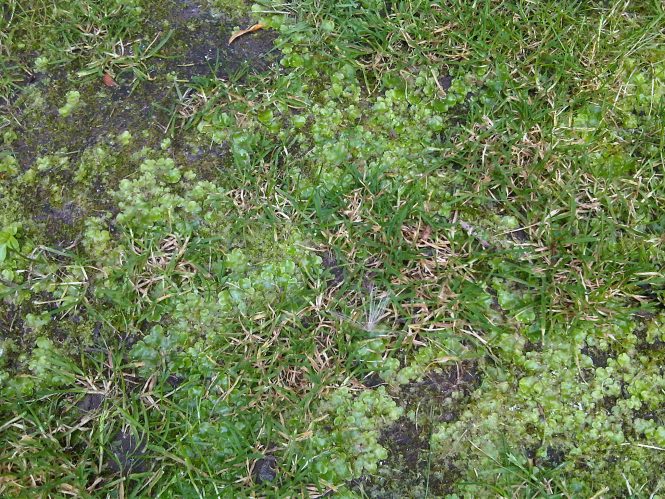 Liverwort is the common name for the family of a primitive, ancient organisms which are only an issue on the most difficult, shadiest areas and at the edges of lawns in all regions of the UK.

They are not a weeds in the traditional sense because they are not plants. Liverworts are Bryophytes, more related to mosses and ferns. They are non-vascular, which means that they do not have any roots, nor do they have a circulation system for transporting nutrients around internally. Liverworts are a much simpler organism, possessing only basic tissue structures.

The most common found on UK lawns is Marchantia polymorpha. This is just one of nearly 300 different species of liverworts found in the UK. It is also called the common liverwort and can be found populating dark, shady areas all over the world.

The liverworts gained their curious name from medieval herbalists who believed that the fleshy parts of these organisms cured liver diseases, since proved false.

Liverwort is a small organism, with each plant rarely growing more than 1cm long. It generally has a green, fleshy, flat body, with no leaves or roots, but despite it’s small size it is very effective at colonising large areas through weight of numbers. It stubbornly clings to surfaces with fine root-like structures called rhizoids. These can make thorough removal of liverwort on hard surfaces and compacted soil quite tricky.

How does liverwort spread so quickly?

Liverwort reproduces in a number of ways, sexually and asexually. Plants are either male or female, and when they “flower” the male releases sperm into the air which lands on the female flower parts. Spores are then created and then released onto the wind and spread far and wide. These spores then land in a new area and grow into new liverworts.

Liverworts can also spread asexually in two different ways. Firstly by vegetative reproduction, growing new offspring when older areas die. Secondly by growing clusters of “clone cells” (called gemmae) on their surfaces which are then dispersed by raindrops some distance from the parent, growing a new liverwort in a new area.

These methods enable liverworts to quickly colonise large areas. Once they have an established colony, they will be difficult to eradicate. They can re-appear quickly, as long as conditions are favourable.

Liverwort on a lawn?

Liverworts grow on the soil surface. Usually where the drainage is poor, compacted and often very shady. It often colonises areas of the garden which other plants, and even moss, find uninhabitable. A dark corner, an area underneath a bush or in the corner of a wall are all common spots.

Liverwort is rarely a problem on an established lawn. The fact that it does not favour sunlight, well-drained soil and other good growing conditions means that it doesn’t compete directly with grass. It moves into areas were grass cannot grow.

If you find that it has crept into an area of your lawn you will also notice that the grass is thinning and not doing well at all. Lawn grass cannot grow everywhere. If you have an area of liverwort, it is a good sign from nature to give up on trying to grow grass in that area!

As it is not a plant, weedkillers have no affect on Liverworts. They do not work in the same way as plants. The easiest way to control it is to scrape it off the soil using a spade or hoe. Some say a soluble iron solution does discourage it (in a similar way to dog lichen) however this would only over keep it in check and wouldn’t really control a large patch.

The most reliable way to control Liverworts are to improve the environmental conditions. Improve soil drainage by aerating and brushing in a horticultural sharp sand. Top dress with a fresh topsoil or a good quality compost and reduce shade by cutting back shrubs and overhanging tree branches. This will encourage grass and discourage the Bryophytes.