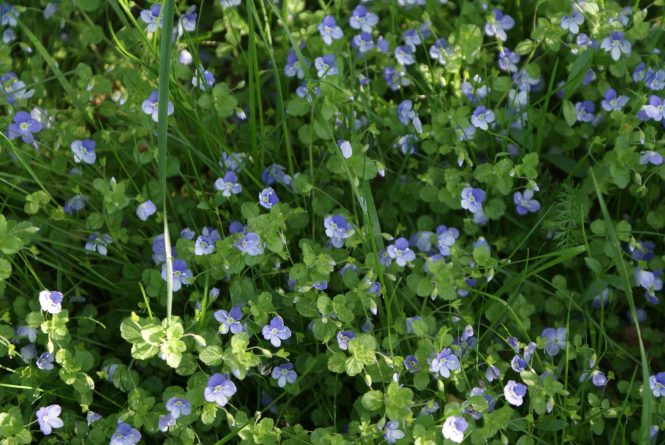 Slender speedwell (Veronica filiformis) is a creeping perennial herb. It grows on lawns all over the UK.

The botanical name Veronica filiformis originates from both Latin and Greek. Veronica comes from the woman canonised as Saint Veronica. She is said to have wiped the blood from the face of Jesus on his journey to Calvery. The name veronica was attributed since the flowers of this herb resemble the stains that remained on the cloth. Filiformis translates as ‘threadlike’ in Latin, describing the fine stems of the plant. The common name “speed well” derives its name from the ancient meaning ‘to thrive’.

Slender speedwell is native to eastern Europe and western Asia. It has spread around the world as a common weed. It arrived in the UK in 1808 as a rock garden plant and was first reported in the wild in 1838. Planted as ground cover in gardens and valued for its pretty blue flowers. It is  established throughout Britain.

Slender speedwell is a member of the Plantaginaceae family of plants. These also include Antirrhinums (snapdragons), Digitalis (foxgloves) and greater and ribwort plantains. Veronica filiformis is similar to other veronica species, such as Veronica arvensis (wall speedwell) and Veronica chamaedrys (germander speedwell). It is distinguished from these by larger leaves and lack of seed capsules after flowering.

Slender speedwell survives in most soil conditions. It prefers shade and a moist, fertile soil. As it is a perennial, the weed overwinters as a stem on the soil surface. It re grows in the spring.

If it is not flowering, slender speedwell can be tricky to spot in a lawn. The plant intermingles with the grass and the leaves are of a similar colour. Lawns can become infested with this weed.

How to identify slender speedwell

Slender speedwell grows along the ground. Speedwell rarely grows higher than grass. It spreads like a net, with each node being able to root.

The stems are round, flexible and can grow up to 70 cm long. Stems grow along the ground with the tips curving upwards so they can spread over other plants.

The stems and undersides of leaves are hairy. Leaves are kidney shaped, 5–10 mm across, broad and notched at the edges. They are pale to light green in colour.

Speedwell appears to suppress grass and other plants around it. Although there does not seem to be any research on how it does this.

The flowers are beautiful and easily seen on a lawn.

Speedwell flowers on sunny days between April and July. The flowers are small, 1 cm wide and solitary on the stem. They originate at the node of the main branch and the leaf stem. The three upper petals of the flowers are blue and the lower petal a whitish, paler blue.

It is a sterile plant. The flowers do not set seed. Slender speedwell spreads almost entirely by vegetative reproduction. Stem fragments carried on boots, lawn mowers and in lawn cuttings root and grow new plants. The shallow, fibrous roots appear from cuttings in less than a week and grow vigorously. This is how it can become a problem in lawns.

Speedwell is edible. Cooks add it raw to salad and soups. DO NOT eat any from a maintained lawn to avoid possible chemical contamination.

It has a slight bitter and astringent flavor and odour akin to tea. This led people in the 19th century France to use the herb as a tea alternative called “thé d’Europe”.

Slender speedwell has been used for hundreds of years to treat medical conditions. There is evidence to suggest that the herb was already in use in ancient Rome two thousand years ago. According to records, speedwell used to be considered a remedy to all sorts of medical conditions. These ranged from common colds to gall stones. It has fallen out of use as modern medicine has progressed.

Slender Speedwell is a persistent weed and is very resistant to many selective lawn herbicides.

You can pull individual weeds out by hand. Ensure all root and stem is dug out to prevent re-growth.

Feeding and top-dressing a lawn will encourage vigorous growth of grass to out compete the weed.

Due to the speed at which it can spread, it is best to use stronger herbicides to remove it. For advice on controlling slender speedwell in your lawn, ask a question or get in touch.