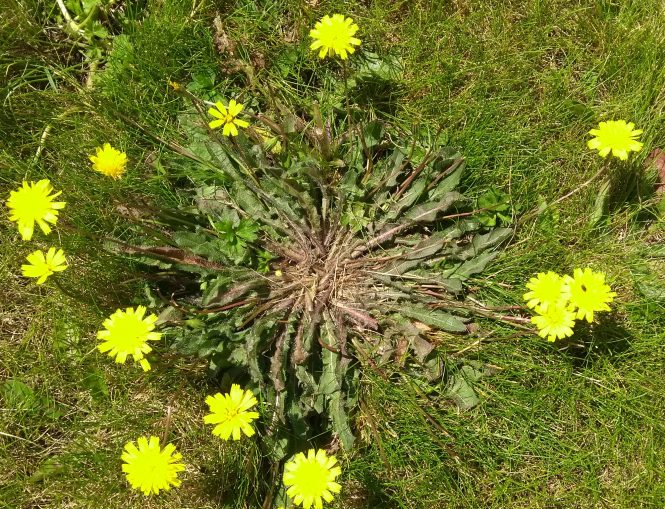 Common catsear (Hypochaeris radicata) is a large, broad-leaved lawn weed that is common in very neglected lawns in England.

The name refers to the shape and fine hair on the leaves resembling that of the ear of a cat.

It is also referred to as flatweed (in Australia) and the false dandelion. This is due to its similarity to the more common dandelion (Taraxacum officinale). It can be distinguished from dandelions by the fact that the flower stalk is solid and often forks off to two or more flowers. Dandelions hold single flower stalks which are hollow. There is also a noticeable difference in the flowers. The petals of a dandelion flower are rather rounded at the ends, a catsear have a distinct flat edge to them and are thicker.

It is a perennial weed, which means that the same plant will return year after year if not removed.

The catsear leaves can grow up to 25cm long and form out of a central rosette, rather than on stalks. It has a single tap-root which can grow up to 30cm long, which means that effective removal by hand-weeding can be rather difficult, and like most successful weeds, any root left in the ground will regenerate a new plant.

Catsear flowers in the summer months, from June until late September. When mature creates hundreds of wind-borne parachutes to spread all over your lawn and garden.

Catsear is actually an edible herb, and all parts of the plant can been used in cooking. The leaves can be used in salads and stir-fries (although the older leaves can become a little tough and bitter). The root can also be ground up and used as a substitute for your morning cup of coffee!

Catsear is easily controlled in lawns, and a regular lawn treatment will take care of any infestation in your lawn.

If you have a problem with catsear in your lawn, then get in touch and I will be happy to advise.