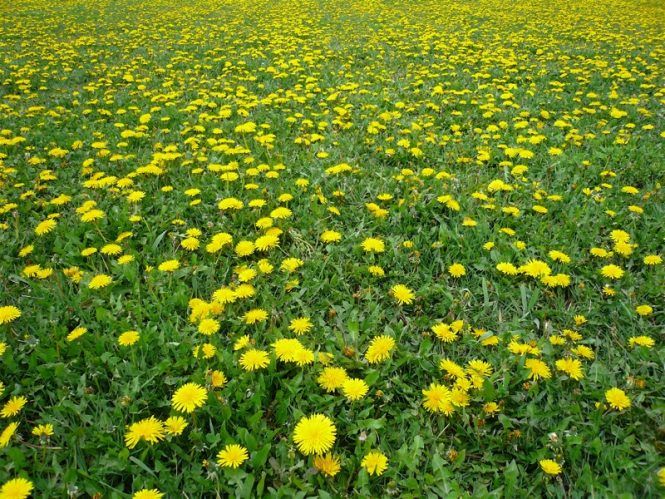 The common dandelion is probably the most well known of all British lawn weeds. Most of us can remember ourselves as children, picking their curious ball-shaped seed heads and blowing them into the wind. They seem to be ingrained into our memories of summer.

The latin name for the dandelion is Taraxacum officinale. ‘Taraxacum‘ being the latin family name for dandelions. The ‘officinale‘ literally meaning “kept in stock by a druggist”, which gives a hint to its background in medicine, which I will touch on later.

Interestingly, the common name dandelion actually originates from the French term “dent de lion” meaning “lion’s tooth”, describing the shape of the dandelion leaves. It has many other common names including blowball, lion’s-tooth, monks-head, priest’s-crown and puff-ball.

The common dandelion is an herbaceous perennial, from the huge Asteraceae plant family (the same as daisies, ragwort and yarrow), and is an extremely common weed in Britain, Europe and many other countries across the globe.

The dandelion is very common

There are over 500 different documented species of dandelions in the UK. One recent RHS study found over 100 in just the Cardiff area alone. For now though, I’ll just concentrate on the most common variety, Taraxacum officinale.

It does look very similar to Common catsear, but is much more abundant.

All dandelion plants grow from a single tap-root which can penetrate deep into the soil. If you are a gardener, you will know how difficult it can be to dig out the entire root of an established dandelion! This is one of the reasons why they can be so frustrating in a lawn.

How to spot Taraxacum officinale

The leaves grow out from the main growing node in a basal rosette formation, and can grow up to 30cm long and 5cm wide. They are long, and lance-shaped and vary, depending on the species, from being deeply lobed through to being almost oval in shape.

Dandelions can produce a great many flower stems at once, but usually they only send up one or two. These can reach well over 50cm in height on well-established plants. On a lawn dandelions barely get off the ground.

The dandelion flower is the most recognisable part of the plant. A vibrant yellow colour which it uses to attract pollinating insects such as bees and butterflies. Once pollinated it quickly “turns inside out” and produces a wonderful ball of “fruits” (the seed). These are connected to silky parachutes which are released on the wind to travel great distances to start the next generation.

It is this ease and speed of reproduction which has helped the species become so prolific and successful around the world, and such a troublesome weed!

Dandelions in cooking and in medicine?

All parts of the dandelion plant are used in cooking. The most common being the leaves. These bitter-tasting and often used in salads. They are rich in vitamins and minerals and can be eaten raw, but are best lightly cooked.

There are a number of drinks that can be made from dandelions, including wine, coffee from the ground roots and the famous favourite dandelion and burdock beer.

Dandelion has a number of medicinal effects. These include aiding digestion, a mosquito repellent and the root is an effective diuretic.

There are many tales in history about the mysterious effects of the dandelion. Have a look around the web to explore some if its supposed mystery powers. This Herbalist page is a good starting point.

Control of dandelions on your lawn

Dandelions are one of the most common weeds to arrive in your garden thankfully it’s also one of the easiest to control. If there are only one or two plants, then hand-weeding is an option (make sure you dig out all of the root though!). If you have allowed your lawn to go to meadow and it seems to be mostly dandelions most lawn weedkillers will take care of it without problems.

A regular treatment will control any dandelion outbreak easily. If you have any questions, please don’t hesitate to get in touch.