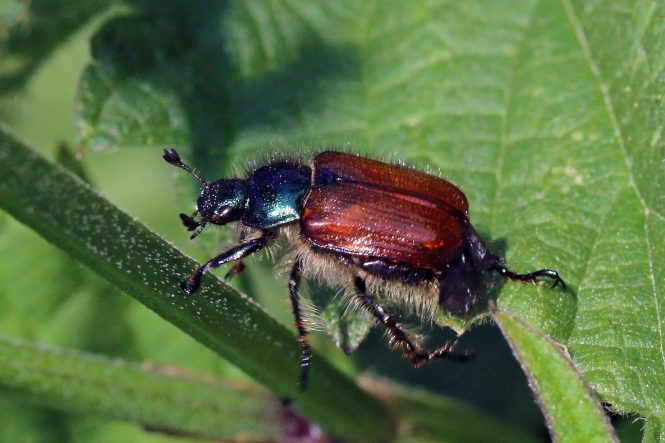 The chafer beetle life cycle is typical of other beetles in the Scarabaeidae family of beetles. Eggs are laid into the soil which hatch into small white grubs. Then, after a lengthy period of growth, these grubs pupate and the transform into their adult forms and take to the air to mate.

They are an interesting species to take a look at, and a very difficult one to control in a lawn.

Adult beetles mate and lay their eggs in the soil in April, May and June. Exact time depends on the species, local climate and location in the UK. The female lays the eggs a few centimetres down in the soil, so you are unlikely to see them on the surface. They are laid in small clusters of up to 6. Each female can lay between 10 to 50 eggs each over a period of several days.

They often choose turf areas as access to the ground is easy on fine grass. This makes your lovely lawn a prime target for a chafer beetle infestation.

The eggs are small (2-4mm) and yellow or white. They do look similar (although smaller) to slug eggs, for which they can be confused.

The eggs hatch into larvae between 2 and 4 weeks later. These larvae are the cause of grief to many lawn owners.

The larvae are c-shaped, white grubs with a small black head. They are initially quite small, about 0.5 cm. They can grow over a number of years to up to to 5 cm in length, although I’ve rarely seen them more than 2 cm. As they age they turn a more grey colour. They are very different to the other main lawn pest, leatherjackets.

The larvae live in the soil for up to 5 years. The grubs eat away at the roots of plants and other organic matter in the soil. This is how the grub causes direct damage to a lawn. Seemingly healthy grass can just die in random patches without warning.

The larvae moves up and down in the soil profile depending on the season. In cold weather it digs deeper. In warmer weather it travels near to the surface to feed. This is why some treatments for chafer grubs only work in specific weather conditions.

The larvae grow through three different instar growing stages, getting larger each time.

The chafer beetle life cycle is such that several generations can live in one patch of soil at the same time. This means that, if you are unlucky, numbers of the pest in the soil can increase over several years.

When the chafer grub has built up enough food reserves it grows a hard shell and transforms into a pupa. This usually happens in the spring as the soil is warming. It stays in this phase for around 4 weeks whilst the body of the insect is broken down and rebuilt into an adult beetle.

When it is ready, the outer shell cracks and the adult beetle emerges. It digs it’s way out of the soil, up through the lawn and takes flight.

The adult beetles emerge from the soil in April, May or June depending on the climate and soil temperature. They usually emerge over a period of about a week and some years can swarm all together.

As soon as they emerge, the females mate and burrow back into the soil to lay their eggs. She will then re-emerge, feed and then lay another batch of eggs. She will do this many times until her energy reserves are depleted and she dies.

Adult chafer beetles can live several weeks and can fly many miles in search of mates and feeding grounds. They eat leaves and flowers of many UK plants, although rarely enough to cause any noticeable damage.

In the past chafer beetles used to be a voracious pest to farmers, but extensive pesticide use dramatically cut their numbers.

Once the adult die and the eggs have been laid the chafer beetle life cycle starts again.