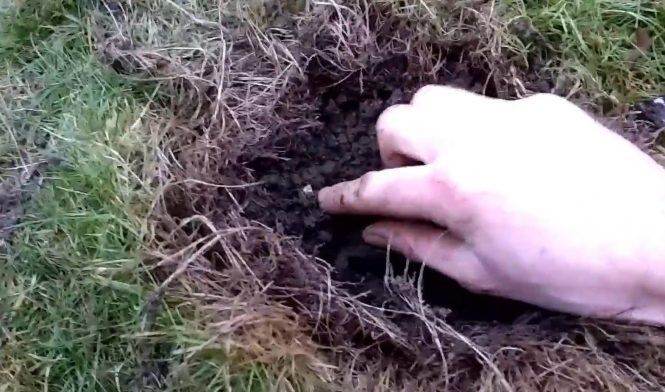 In the middle of December 2017 I received a call from a customer who was very concerned about the state of her lawn. There had been a great deal of damage caused by birds and a fox. Also large areas of the lawn had sustained damaged and the whole area looked a mess.

As soon as I arrived it was obvious that the lawn was the victim of an attacked by chafer grubs. Chafer grubs are the larvae of the chafer beetle. These grubs live in the soil, eating their way through the roots of the grass. They stay in the soil until they are fat enough to pupate and change into adult beetles. Their life cycle can span many years.

A chafer grub can live in the soil undisturbed for a long time. Yet, if they appear in larger numbers they can devastate a lawn. If a fox or badger discovers the chafer grubs, this damage can increase ten-fold.

In this video of me digging up chafer grubs I take a look at the damage caused. You can see that the turf is not attached to the soil. This is a clear sign of root damage. Further investigation leads to the discovery of the culprit. A small chafer grub.

In this video the chafer grubs are quite small. These will be first year grubs, hatched out of eggs laid by the adults in the summer. They are a deeper in the soil than usual as the weather has been colder (Dec 2017), driving them deeper for warmth. There will also be less in this area as an animal has already dug around to have them for a tasty meal.

Lawns which sustain damaged this severe during the winter will take a long time to recover. Cold temperatures in the soil will restrict growth, slowing repair work from establishing.

To repair damage caused by chafer grubs, you can either:

If you live in the Exeter area and have chafer grub damage, please get in touch and I would be happy to advise.