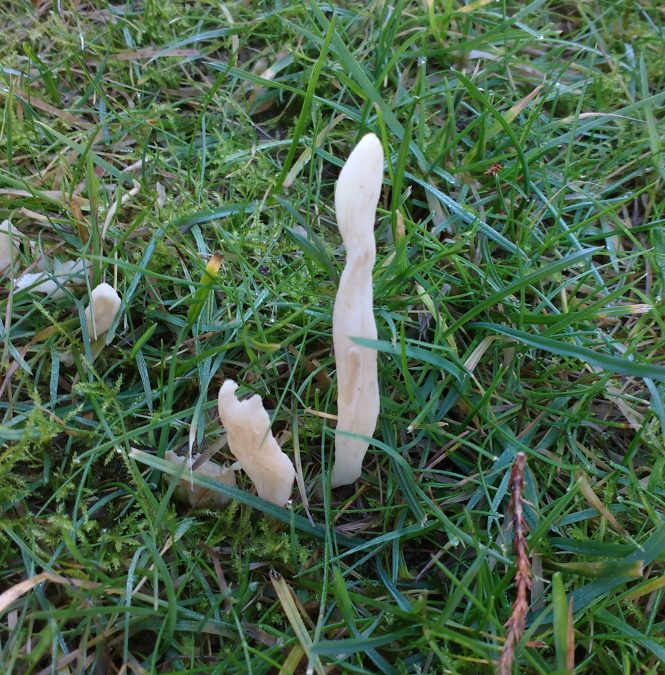 White spindles fungus is a species of fungus in the Clavariaceae family. The latin name for the species is clavaria fragilis. The generic name Clavaria comes from the Latin clava, meaning a club and fragilis means fragile, so it is literally a ‘fragile club’. It is so named as it is very brittle, and the white spindles snap easily. Club fungus grows a similar height to mown grass, so can be overlooked.

It can be found throughout Britain and Ireland and is a common species. Although I have rarely seen it on lawns I treat.

It it also called white club fungus, white worm coral and fairy fingers. Fairy fingers is a very apt name once you’ve seen it in a lawn as it can look like a ghostly hand rising up from the ground.

White spindles fungus is more seen on uncultivated ground rather than manicured lawns. This example which I found was living around the roots of a small pine tree, so some symbiosis with the tree is likely taking place.

White spindles fungus on a lawn

As with the majority of lawn fungus, clavaria fragilis most commonly appears in the autumn, fruiting when the weather turns cool and damp. It is similar in size and shape to Yellow club fungus, which is much more common on lawns in England.

Many sources say that white spindles fungus is actually edible, but tasteless and insubstantial, so not worth picking for dinner.

This fungus has no effect on a lawn and will disappear naturally once the fungus has finished flowering. This is in common with many fungus fruiting bodies. These fungi live in the soil moving nutrients around. They are a sign of a healthy diversity in the area. They benefit plants enormously and there is no need to try to eradicate them.