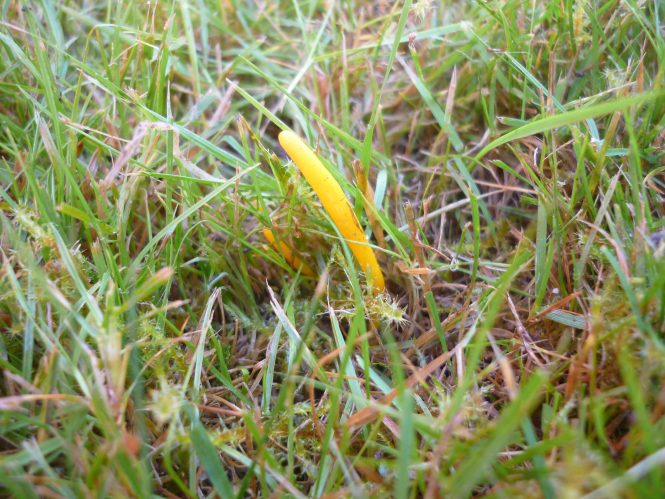 Yellow club fungus is a species of coral fungus in the Clavariaceae family. The latin name for the species is Clavulinopsis helvola. The generic name Clavaria comes from the Latin Clava, meaning a club and helvola means pale yellow. It is literally a ‘pale yellow club’. Club fungus will grow to a a similar height to mown grass, so can be overlooked easily.

This fungus is found throughout Britain and Ireland and is a common species. When conditions are correct I regularly find this little fungus on lawns in England.

Once you’ve seen club fungus in a lawn and know what you are looking for you will see it at lot.

It is more seen on uncultivated ground and older lawns rather than in newer gardens. You may often find patches on their own in the middle of lawns, seeming appearing out of nowhere.

As with the majority of lawn fungus, clavulinopsis helvola most commonly appears in the autumn, fruiting when the weather turns cool and damp. It is similar in size and shape to white spindles fungus, which is much less common.

Many sources say that yellow club fungus is poisonous, so caution is advised if you find this on your lawn. If you have small pets or young children using your lawn, pick the fungus with gloves on, and dispose of in your green waste bin.

As with most fungus, it has no effect on a lawn and will disappear naturally once it has finished flowering. This is in common with many fungus fruiting bodies. These fungi live in the soil moving nutrients around between the soil and plants. They are a sign of a healthy diversity in the area. They benefit plants and there is no need to try to eradicate them.