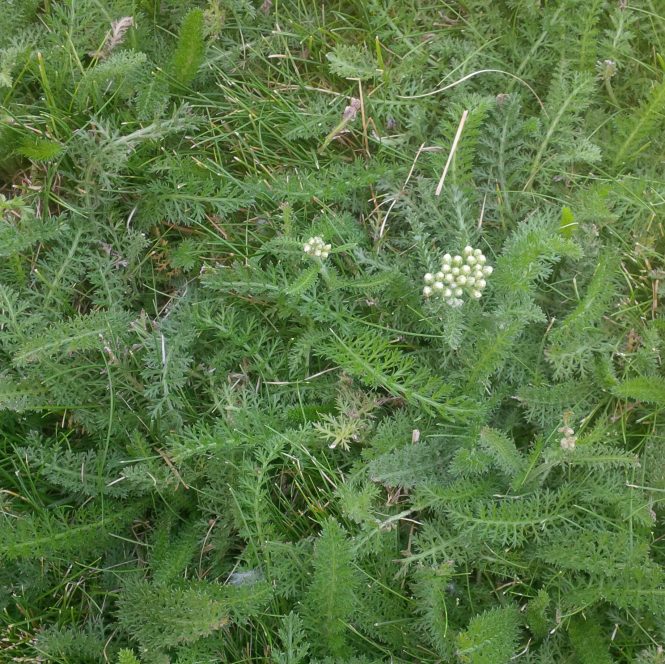 Yarrow (Achillea millefolium) is a herbaceous, perennial herb. It grows in gardens all over the UK. In a lawn is can form a thick, spreading mat and become an invasive weed.

It has many common names including ornamental yarrow, milfoil, devil’s nettle and thousand-leaf. It has also named soldier’s woundwort in reference to its medicinal effects.

The botanical name of yarrow is Achillea millefolium. Achillea is greek and derived from the mythical character, Achilles. It’s written that he carried it with his army to treat wounds. Millefolium means thousand-leaved in Latin, in reference to its fine, divided leaves.

Yarrow is an adaptable and hardy plant. It is native to Europe and western Asia. It was introduced to Australia and New Zealand as a pasture plant. In meadows, the deep roots stabilise and add nutrients to the soil.

It is part of the Asteraceae family of plants, along with dandelions and daisies.

Cultivated forms of Achillea are a common herbaceous garden plants. Sold in garden centres around the country, Achillea adds interest to beds and borders.

Although it is able to grow on any soil, it thrives on dry, sandy lawns which suffer from a lack of nutrition. It is very drought resistant and will out compete grass in hot summers.

It can also tolerate close mowing, so will stay in your lawn all through the main growing season.

How to identify yarrow in your lawn

Achillea millefolium is a very distinctive British lawn weed. The leaves are between 2 and 5 cm long in most lawns, but they can grow up to 15 cm if left undisturbed.

The leaves are green, narrow and are feathery in appearance. On closer inspection you will see that they are very intricate and detailed in nature. The leaves give off a fragrance if rubbed or crushed.

Yarrow flowers between June and October on stalks which are much higher than the foliage. Each plant can produce several flower stalks. The flowers are small and white, cream or pink in colour. They are borne on umbrella shaped clusters.

The roots of yarrow are thin and fibrous, growing from central nodes of the plants.

Yarrow is very hardy in very dry weather. If you happen to be in a drought or heatwave and you have Yarrow in your lawn, it will stay green long after the grass has browned.

How does yarrow spread?

Yarrow plants vegetativley spread by underground stems. These grow outwards from the main plant and root a new plant a little distance away. If allowed to, yarrow also sets seed. The tiny seeds move on the wind and can remain viable in soil for up to a decade. This makes an established yarrow patch very difficult to erradicate.

Regular mowing keeps it from flowering, reducing the possibility of it spreading.

Since ancient Greek times, yarrow has had a reputation for healing wounds. It also has other medicinal uses. These include the treatment of fevers, muscular ailments and respiratory complaints.

In the Middle Ages, yarrow was part of a herbal mixture known as gruit used in beer before hops. The flowers and leaves are still used today to add flavour in the making of some liquors and bitters.

The flowers of Achillea millefolium provide an excellent source of nectar for bees. It is a food source for many species of moths, beetles and insects. Several species of nesting birds use yarrow to line their nests.

It is a useful companion plant in the garden border. It repels some pest insects while attracting good, predatory ones. So, even if you don’t want it in your lawn, it is very worthwhile to cultivate in your borders.

In rare cases, yarrow can cause allergic skin reactions, so care is advised while weeding. Yarrow is also toxic to dogs, cats, and horses if eaten in large amounts.

Hand weeding may be a possibility if there are only a few plants. Any part of the plant left in the ground may re grow.

Keeping the lawn in a healthy condition will suppress it. Top dressing twice a year and fertilising the lawn is ideal. Also keep the grass well watered during time of dry weather helps.

Chemical control is possible. There are some household weedkillers which will keep it in check. The problem is that the leaves are very thin and tough. Getting the weedkiller into the plant is very difficult. Spray in dry weather and damage the plant before spraying to increase uptake.

Professional weedkillers will have better results. They need to be applied by a lawn care professional and are not available to the public.

An established patch of yarrow may take many years to bring it under control. Seeds laying dormant in the turf will sprout again year after year.

If you have a problem with weeds in your lawn, please don’t hesitate to get in touch.

Other Pictures of Yarrow