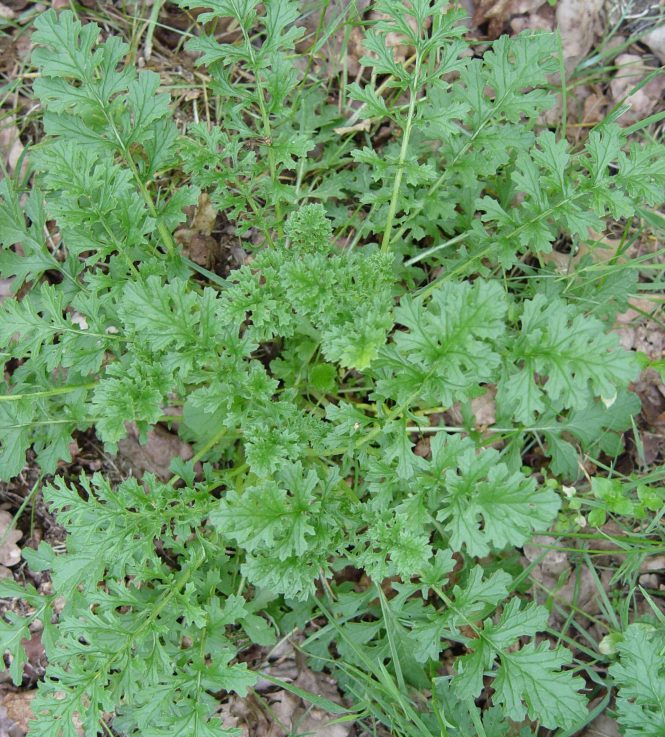 Ragwort is a reasonably common weed seen on many lawns across Devon.

The latin name is Jacobaea vulgaris (syn. Senecio jacobaea). Jacobaea is the family of plants to which it belongs (which is within the tribe Senecioneae) and vulgaris literally means “common”.

It is also called stinking willie, ragweed or ragged weed. The latter probably came about due to its rather untidy appearance.

It is a native plant to all of Europe and Asia, and has been introduced to the Americas, Africa and Australia and New Zealand, where it has been classified as an invasive noxious weed.

The Jacobaea is a huge genus of plants in the Asteraceae family, so it is a distant relation to the common daisy, ragwort and yarrow.

In Devon, I see it on a wide variety of lawns and uncultivated ground, but it is rarely a problem and usually it is seen as just one or two immature plants that have made their way onto the lawn.

How do I identify ragwort?

I think ragwort is one of the easiest lawn weeds to identify. It is quite large and its leaf shape is unlike any other common lawn weed in the area.

On a lawn, ragwort rarely grows more than 20cm wide and 15cm high but, uncontrolled in open meadows and on verges, the flower stalks can grow up to 1m in height.

The leaves grow out of a central growth node and are up to 20cm long, pinnately lobed, with the end lobe being blunt. Generally it looks like a very untidy plant.

It spreads through seed dispersal, releasing a great many seeds from mature plants. In a lawn, it will rarely flower due to it being a biennial (meaning it flowers in the second year) and it is mown regularly, which is why it often only appears as one or two individual plants that have migrated into your garden.

In its second year, and if it is allowed to, it produces a great many yellow, daisy-like flowers which are pollinated by bees, flies, moths and butterflies. This habit means that it is a biennial plant, although if prevented from flowering can be classed as a perennial.

How poisonous is ragwort?

There has been a great deal of coverage over the years regarding the toxicity. And yes, it is true that it will harm grazing animals that consume it in large quantities. This fact has led it to be one of only five weeds that are specified as injurious weeds by law, meaning that is must be controlled by landowners to prevent its spread onto grazing land.

However, in reality ragwort is not a danger to humans, and one would need to consume many kilograms of leaves for it to have any detrimental effect.

Ragwort is quite an important plant for local wildlife, however the small immature plants that are generally found in lawns are of little benefit to pollinators and other insects. For more information have a look at the ecological page on Wikipedia.

How do I control it?

As ragwort only usually occurs as one or two plants, it is usually possible to hand weed them by digging them out. However, care must be taken as the roots are very fibrous and leaving any root in the ground will produce another plant.

The most effective control of ragwort weed is by using a herbicide, and any of the regular summer treatments will control ragwort quickly and completely, and the large leaves enable easy uptake of the chemical.

If you have a problem with weeds in your lawn, and live in the Exeter area of the UK, then please don’t hesitate to get in touch and I will be happy to advise.