Home » Is your lawn infected with rust disease? 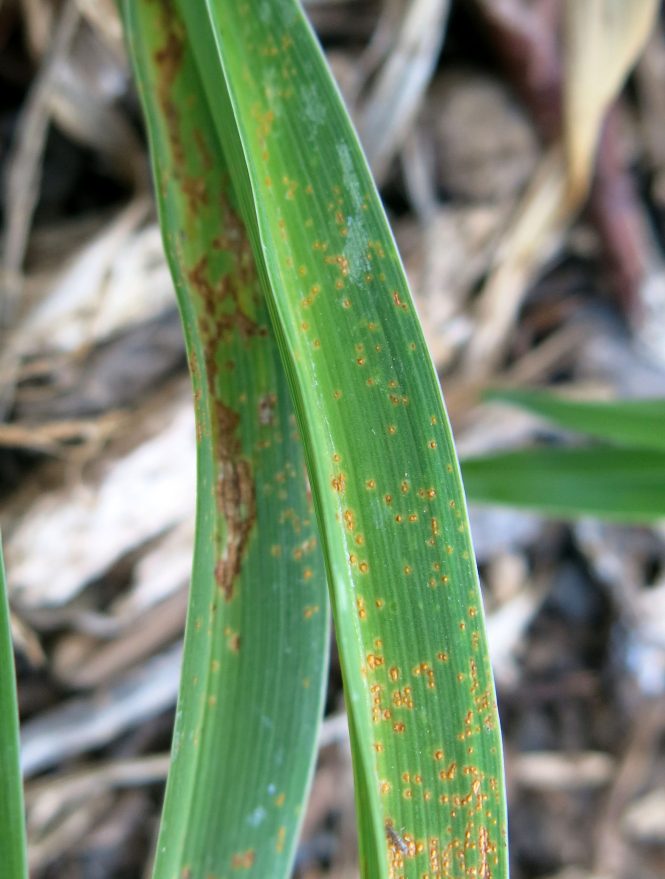 Recently, I have observed one or two of cases of my maintained lawns becoming infected with lawn rust disease. So I thought I’d explain a little about this disease and why grass in the UK is currently susceptible to this common infection.

What is rust disease?

Sometimes known as leaf rust or lawn rust, rust disease is a fungal infection caused by organisms in the species family Pucciniaceae and are some of the oldest diseases known to attack grass species.

Nearly 8000 species of rust fungi are known to science and they infect a wide variety of plants, not just grasses. Some species are known to infect many different plants and others are very specific to which plants they can infect. Sometimes two or more rust fungi may attack the same grass plant at the same time.

All rust fungi species are obligate parasites, which means that they require a living host to complete their life cycle. They generally do not kill the entire host plant but may kill leaves and will severely reduce their growth and health and will certainly expose it to more damaging diseases.

The fungi that cause rust diseases are very different to those that may produce mushrooms as rusts cannot grow in your soil or decompose organic material. They are simply pathogens that move from leaf to leaf.

You may also recognise rust as a disease on other plants in your garden. On my allotment, I have a particular problem with rust infections on my onions and garlic crops. Although these are not exactly the same pathogens that may infect your grass, the principle of infection and subsequent weakening of the crop is the same.

How can you spot rust disease in your lawn?

An infection with rust disease is very easy to spot in a lawn. The first thing that you will notice, especially if the lawn hasn’t been mown in a couple of weeks, is that the longer blades of grass will be yellowing, and looking generally unhealthy. Upon closer inspection you may notice that surrounding leaves may have orange fungal pustules along the length of the grass blade and maybe coated with a ‘rust’ coloured powdery material (from which the disease gets its name) which you can easily rub off.

The particles of this powder are the fungal spores which help the disease to spread from plant to plant. If you notice a rust-coloured powder on your shoes after walking on the lawn, it has a rust infection.

In the UK, rust can affect most lawn grass species, however I have only ever seen it on broader-leaved rye grass species. Grass in the shade does seem to be much more susceptible than grass grown in full sun.

If your grass is stressed, the soil is low in nitrogen, (which can be a problem after prolonged rain, such as we’ve had so far in 2012), if it is infected with other problems, or in decline due to poor maintenance it is much more likely to suffer from a lawn rust infection.

In the UK, when is rust normally seen on lawns?

In the UK, lawn rust is normally seen on lawns between early summer and the autumn, (May to November), but it can appear outside of these times if the warm and wet conditions which it favours do persist.

Lawns are also more prone to infection if left to grow long, as the action of mowing tends to cut off the infected leaves before the fungus has a chance to take hold and spore.

How does rust infect your grass plants?

The orange pustules on the grass leaf created by the rust fungus produce tens of thousands of microscopic, asexual, fungal spores that can be carried for long distances on the wind, by foot, on animal or on the blades of a lawn mower. Once they have found their way to their next host they need several hours of damp in order to germinate and infect the new host leaf, which is why rust becomes more of a problem during wet weather. Shortly after infection, small light yellow flecks appear on the grass leaf which soon enlarge. The rust fungus feeds off the cells of the grass plant, weakening it and, several days later, these initial wounds rupture, tearing away to expose the spore-filled pustules and distribute them to the wind, starting the life-cycle of the fungus again.

This whole process takes around two weeks, which is why longer, un-mown grass can be more prone to a severe rust attack as the injection can take hold and is then able to infect other grass plants locally.

What damage can rust disease infection do to grass?

However, the weakened grass can be then more susceptible to infection to other diseases, such as red thread or fusarium, which can become a serious problem.

How can you control a rust disease infection in your lawn?

The best way to control a rust infection is by improving the strength of the grass through regular lawn maintenance. Keeping it fertilised, watered, aerated and mown correctly will improve the ability of the grass to fight any infections itself. If you can, it would also beneficial to reduce the amount of shade on the lawn and to space plants around your lawn so that there is a healthy amount of clean air circulated over the lawn.

If you have a light Rust infection, an application of a good quality fertiliser containing Phosphorus and Potassium, to help boost the natural disease resistance of the grass will help tremendously.

However, if you are unable to mow your lawn for a number of weeks, or you experience a prolonged period of wet weather and you have naturally poor, well-drained soil that the nutrients are leached from it quickly, then an application of a lawn fungicide treatment is recommended. Unfortunately, there are no fungicides able to control rust available to the general public, so you will have to have this treatment applied professionally. This will combat the fungus at the source and kill off the infection, allowing the grass to recover and green-up quickly.

If you regularly suffer from repeat rust infections, then it would be a good idea to consider overseeding your lawn with a grass species that is much more resistance to infection.

If you have a problem with lawn rust disease on your lawn, then please don’t hesitate to get in touch and I will be happy to advise.