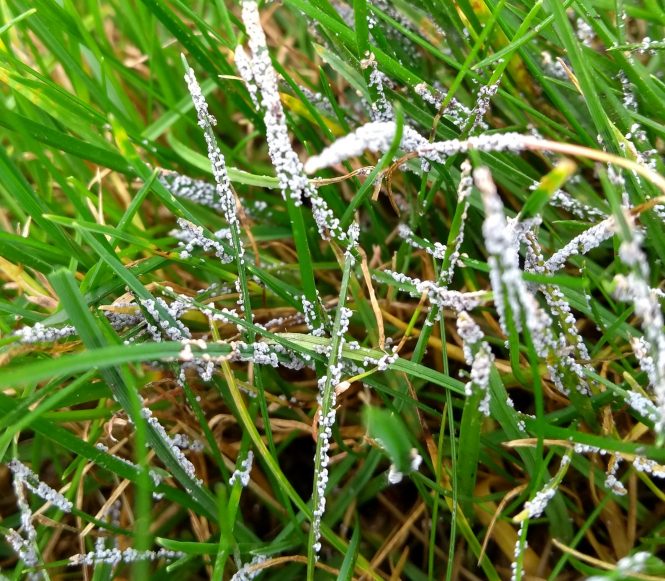 This autumn (November 2020) there seems to be great deal of interesting slime moulds appearing on lawns. I recently found this fantastic Grey Slime Mould (Physarum cinereum) on a lawn in the Devon town of Exmouth.

Grey Slime Mould is a collection of single-celled organisms. They look like sooty deposits spilled on the grass. Spread over several metres this one stood out as something rather curious. Almost like spilled paint.

Upon closer inspection you can see that it is collections of grey globules on the grass leaves. This species of slime mould is Grey Slime Mould (Physarum cinereum) or the rather fun name “UFO ash”. It is quite rare in the UK and in over ten years of professional lawn care this was the first such colony I have found.

What is grey slime mould?

Slime moulds are not a single organism. They consist of large numbers of microscopic single-celled organisms called Protozoa. These microscopic organisms multiply in huge numbers to create a visible slime mould structure.

They are in the taxonomical class called Myxogastrea, being neither plant or animal. More related to Fungi than any plant.

The spores of slime moulds remain dormant in the soil most of the time. When the environmental conditions are correct they multiply and increase in numbers and bloom. This is the structure which becomes the slime mould. They do this to release their spores which floats away and ready to start the next generation. Once the spores are released the structure collapses and the slime mould dies.

They can appear on any lawn and are not affected by the heath of the grass or soil, so it is generally not a sign of poor lawn health.

Slime moulds do not harm grass. They grow up in and around the grass leaves and get their food by smothering bacteria, spores and tiny organic matter as they grow.

Once they have died back they sometimes leave a black “splodge” on the grass. You can remove this with a rake or the mower. The grass leaves may also appear yellow after the mould had reduced. This is due to the leaf being shaded out. It is not damaging and the grass plants will recover.

As it does not harm the grass there is no need to control it with treatments. If it looks untidy and you would like to get rid of it, then you can squirt it with a jet of water to wash it off. You can also raked or brush it out with a stiff broom. It will leave on its own in a few days though and the grass will recover without damage.

If you have a strange growth or a slime mould on your lawn I would love to see it. Please get in touch and send me a picture on my ask a question page.