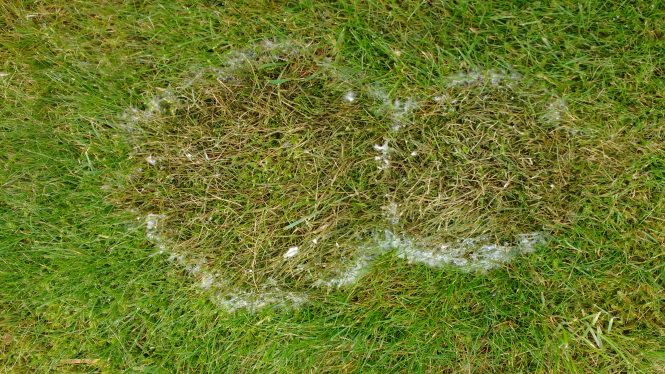 Fusarium patch disease is a very common fungal lawn disease throughout the whole of the UK. It is also sometimes called fuzz, snow mould or Microdochium patch.

The current Latin name for it is Microdochium nivale (syn. Monographella nivalis). It was previously called Fusarium nivale, from which it gained its most common name.

Fusarium patch disease is the most common cause of strange brown, circular patches on lawns. It is often most noticeable after periods of standing snow have thawed (leading to the other common name of ‘snow mould’).

The small brown patches of dying grass that it causes, increase in size quickly over just a couple of days, sometimes to over thirty centimetres or more. These circles will gradually merge together so that large areas of lawn can eventually become infected.

Often, after it has become more established, the fungus also shows itself as a white or pink cotton-like fungal growths on the grass leaves, binding them together.

Fusarium patch can affect a wide variety of cool-season grass species that we have in the UK, including bents (Agrostis sp.), fescues (Festuca sp.) and rye-grass (Lolium perenne), but it is a particular problem with the broad-leaved annual meadow grass species (Poa annua).

So how does my lawn become infected with Fusarium patch?

Fusarium patch disease is caused by a fungus, which spreads from lawn to lawn by the transfer of fungal spores, which are most commonly transported around on the wind.

Once it finds a home, it lives as a saprophyte on decaying matter in the thatch of the lawn during the summer months and, as the weather becomes more favourable for the disease, it spreads as mycelium and turns to being parasitic, attacking and infecting the living grass tissue.

This change can happen at any time of year, but during the summer the grass is usually growing too strongly for it to be noticed. However, during the winter, growth slows and the effects of fusarium patch disease are much more noticeable and it can take hold much more completely.

Fusarium can survive in the soil down to very low temperatures. The ideal conditions for growth is when the ambient temperature is between 12-19°C.

Short periods of cold, moist weather, or a sudden sharp frost, can weaken turf and cause it to become more vulnerable to a fusarium patch outbreak, especially if the grass is unable to dry out.

Are some lawns more prone to a fusarium patch attack than others?

Fusarium patch disease attacks weaker grass much more easily. The best way of keeping the disease at bay is to keep your grass and soil as healthy as possible.

Preventing compaction by keeping it aerated and avoiding putting down high-nitrogen fertilisers in the autumn (which promote soft, weak growth) are the two most important factors that can hinder potential infection.

Fusarium patch also prefers a more alkaline soil (a higher pH) and soils which are low in Potassium. This is because Potassium (the K out of NPK) is the main element for hardening grass and improving its immune system. However, because it is also the shortest chemical element, it is also the first to be washed out of the soil due to rain, meaning an autumn treatment is even more important to keep the grass healthy during years of high rainfall.

Fusarium patch is also called snow mould because of its habit of infecting fine lawns while they are covered by a layer of snow, with the attack only showing after the thaw. This is because the combination of a consistent temperature and increased levels of carbon dioxide underneath the snow are particularly favourable growing conditions for the fusarium fungus.

What damage does fusarium patch do to a lawn?

Fusarium patch is one of the most damaging UK lawn diseases. Usually (similar to Laetisaris fuciformis) to  it will only affect the leaves of the grass plant.

But, when an infection is allowed to go unchecked, it can kill the crown of the infected grass plants. This causes areas of the lawn to die completely. These patches would then require repairing when conditions allow. If the attack is in the winter this may be some months away.

How can you treat a fusarium patch disease attack?

There are several ways to successfully combat a fusarium patch infection. The most effective method would be to employ a number of these controls and attack the disease from several directions.

Following a number of these routes will give you a really good chance of avoiding a fungal outbreak. Helping your lawn look great throughout the year.

Remember that it is a fungus that produces literally billions of spores, so it’s impossible to eradicate completely. The best control is to maintain a healthy lawn that is not pre-disposed to an attack in the first place. If you are unlucky enough to see an outbreak, early control will always give the best results.

If you live in the Exeter area of the UK and are worried about fungal infections on your lawn, then please don’t hesitate to get in touch and I would be happy to advise.